When Tea for Two was the song of the day and a cloche hat with white gloves was high fashion, a special group of women led by Gladys Bernice Wilkinson gathered.As Patronesses of the Los Angeles community, they made layettes for the American Red Cross and assembled food baskets for the hungry. They called themselves “The Charity League.” 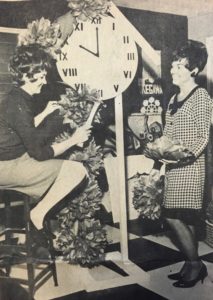 Their daughters formed their own group and held their first meeting in Beverly Hills, CA at the home of Polly and Frances Hanson. At this meeting, the girls chose the name Ticktockers since they would watch the clock waiting for their mothers. Mrs. Paul William Lawrence (one of the daughters that joined) is considered the founder of National Charity League (NCL).

FUN FACT: The Ticktocker clock shows the hands at 10 o’clock because they always met at 10 0’clock on Saturday mornings.

The first large Ticktocker party, The Moonlight Ball, was held at the Clarence English Estate in Arcadia, CA on June 7th.

Mrs. Paul Lawrence registered the name The Charity League with the state of California in Sacramento on April 10th. Shortly after, everything was put on hold due to World War II.

Ticktockers reactivated after the war ended. They organized in groups according to grade levels 7 through 12.

The Charity League was reorganized and all groups united to become the nation’s first mother-daughter charity, renamed National Charity League (NCL). Mothers chose to name themselves “Patronesses”. On September 10th, NCL incorporated as a non-profit organization and expanded its program beyond philanthropic work to include educational and cultural activities. During this year, the Ticktocker house was purchased on Motor Avenue in Los Angeles, CA, which served as a community center and also the first Thrift Shop and Toy Loan Center. The house was later sold in 1953.

27 Ticktockers from the Los Angeles Chapter were presented at the first Coronet Debutante Ball, held at the Beverly Hills Hotel in Beverly Hills, CA as culmination of their years of service to the community. Proceeds went to the Youth Center Building Fund.

The Articles of Incorporation of National Charity League, Inc. (NCL, Inc.) were amended to conform the new requirements of the state and federal government.

A Board of Managers was formed to extend expansion efforts of National Charity League and to oversee the awarding of scholarships to deserving women in colleges and universities. The following year, the Board of Managers Constitution was drawn up. NCL, Inc. began to expand as the Glendale Chapter was chartered.

We continued to grow as the San Fernando Valley Chapter was chartered. The following year, the Foothill Chapter chartered. 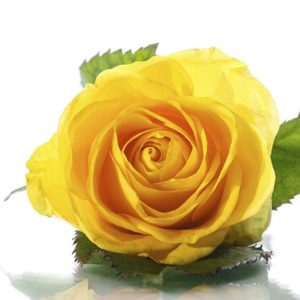 NCL., Inc. was created for the purpose of encouraging the establishment of Chapters to be licensed and chartered to use the name National Charity League in accordance with the standards to be determined and maintained by the corporation.

Representatives from all four Chapters met in Pasadena, CA on May 2nd to sign these Articles of Incorporation under the leadership of the first National President, Mrs. Hugh H. Yancey.

FUN FACT: Also on May 2nd, gold and white became the official colors of the organization, with the yellow rose selected as the official flower.

The first Chapter Day (a gathering of all the Chapters) was hosted by the Los Angeles Founder Chapter at the Observation Nursery School, one of its philanthropies.

The Los Angeles Founder Chapter hosted the first Convention with the theme of “Horizons Unlimited” at the Huntington-Sheraton Hotel in Pasadena, CA.

The Newport Chapter organized the first NCL Juniors Group. This group was formed to give graduate Ticktockers, andtheir working and married friends, the opportunity to be involved with NCL, Inc.

Mrs. Edward Corlett, President of NCL, Inc., asked Mrs. Earl Olrich (NCL, Inc. Past President) to form the Ex-Execs, an informal group created to continue friendships formed while serving on the National Board. Their first meeting was held at the South Coast Plaza Hotel in Costa Mesa, CA.

FUN FACT: Today, the Ex-Execs are invited to a recognition luncheon during Conference.

The Chapter Day alternating year concept was replaced by an annual two-day convention.

The Bylaws were revised to comply with new nonprofit corporation laws for the state of California. These revised bylaws clarified the corporate structure of NCL, Inc. as a corporation with representative membership body known as National Council.

FUN FACT: The yellow rose is our organization’s symbol of appreciation, friendship, joy and delight.

Chapters continued to be chartered, celebrating Sonoran-Centennial in Phoenix, AZ as the 100th Chapter! During this year, the first convention outside California was held in Houston, TX, themed “Deep in the Heart of NCL.”

Our first mission statement was approved: To foster mother-daughter relationships in a philanthropic organization committed to community service, leadership development and cultural experiences.

FUN FACT: In our Chapter Recognition program, the blue rose is a symbol for realizing one’s dreams.

The National Convention evolved with the addition of another day, making it a three-day convention, held that year in San Diego, CA.

This year, the organization launched its first Capital Campaign with the goal of securing funding for the National headquarters. Also, the first leadership development program was developed, which utilized NCL volunteers as trainers to provide guidance for Chapter Officers and grade level advisors.

FUN FACT: 2004 was the first time that the Convention was hosted by a region, as opposed to a Chapter.

The National Charity League trademark was registered with the US Patent and Trademark Office. This project was handled in cooperation with the Los Angeles Founder Chapter.

FUN FACT: The first executive director was hired, along with an additional employee in 2006.

This was the year of NCL, Inc.’s Golden Anniversary since incorporation in 1958.

NCL, Inc. National Bylaws restated for the first time since the 1950’s.

The first National Philanthropy Initiative, Operation Valentine, is developed to support military members and their families. In the initiative’s second year, 104 Chapter participated. 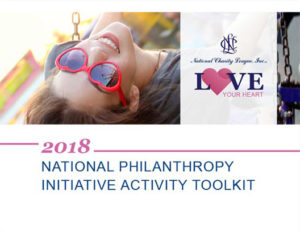 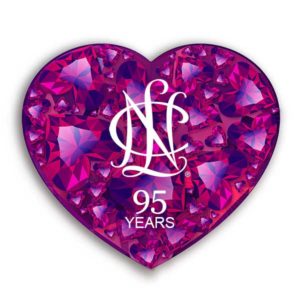 This year celebrates the 95th Anniversary since 1925. It is symbolized by a ruby. The theme for this celebration is “We are One, Leading with Hearts and Hands.”

FUN FACT: The ruby in our Anniversary art has multiple small individual hearts forming a larger heart. The small hearts represent our many Chapters coming together as one.

NCL, Inc. continues to impact more communities, establishing new individual non-profit 501(c)(3) Chapters across the nation, governed by a volunteer board of directors and supported by a headquarters staff.